While 30 years may not seem like a long time for a 110 year-old company it is a very long time for a roof to perform. In 1982 Bellavance Beverage was located at One Bud Way in Nashua. The vigorous economy of the 1980’s was taking hold, and Bellavance found it necessary to expand its warehouse. 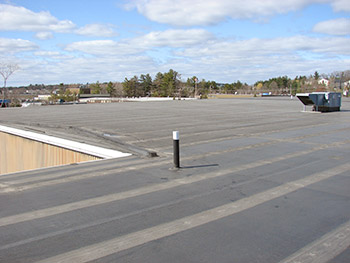 The new warehouse expansion would connect to the existing structure along one eave. This meant rain water and snow melt would continue to spill off the roof edge and onto a loading dock area, requiring the use of diverters to move the majority of the water off to the sides.

The specifications called for an insulated EPDM rubber roof system that would be anchored to the steel roof deck with screws and discs. Single ply roofing systems had come into the commercial roofing market in the 1970’s and by the mid 1980’s enjoyed wide distribution, however, the technology was still developing and occasionally materials did not perform as anticipated. After the conclusion of the project it was discovered that the sealant tape in the system was not remaining adhered. Working in conjunction with the manufacturer new sealant tape was installed and the problem was resolved.

About six years later Bellavance contracted us to re-roof much of the remainder of this facility. While re-roofing the existing areas, we noticed flashing details at the eave edge diverters suffering from the expansion/contraction of ice build-ups. We suggested a routine schedule of inspection and repair on these areas at an interval of at least once every two years. This process continues today and has contributed to the long service life of roofing at this facility. The original warehouse addition is now in its 30th year of service, in no small measure, due to a pro-active approach to roof maintenance.

Performing emergency repairs and periodic maintenance on single ply roof systems over an extended period of time has equipped our staff with a unique understanding and knowledge of how these systems perform and where they are most likely to have problems. The Melanson Company now boasts a full time Service department that has helped many building owners get the most out of their roofing investment.