The majority of the buildings at Vernon Advent Christian Home  were built in the 1960’s. The design included both sloped and flat roofing. The original roofing systems were mostly built-up asphalt with pea stone surfaces. This was also the case for many of the sloped areas. 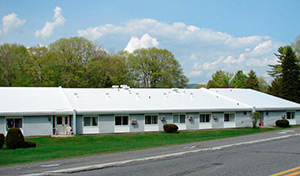 As was typical at the time, these buildings were insulated below the roof decks and with less insulation than we would expect in today’s structures. These buildings experienced significant heat loss which contributed to problematic ice backup problems over the years. In the 1980’s The Melanson Company began performing maintenance work on these roofs and at the same time a re-roofing program was put in place for the areas that had gone beyond their reasonable service life.

The first re-roofing was completed with EPDM rubber membranes. These systems included additional roof insulation to help reduce energy costs. Water tightness was accomplished with the use of contact adhesives in the field seams and flashing details. (As EPDM technology developed, adhesive tapes took the place of these contact adhesives and greatly improved the long term performance of these systems.) By the year 2000 the old glued seams began to require regular maintenance, especially in ponded areas and where winter ice had a tendency to form.

During the 1990’s the sloped roofs at the facility were coming due for re-roofing. Ice build-up on these structures had become a severe problem. With this in mind The Melanson Company suggested a PVC roof as manufactured by Sika Sarnafil. This thermoplastic system incorporating heat-welded seams and details proved to have tremendous resistance to the rigors of destructive ice formations. The oldest of these roof sections, now in service for over twenty years, continues to perform well.

The EPDM roofing at the facility has benefited from a routine of regular maintenance and after twenty years continues to perform. With a course of continued monitoring and good roofing choices the Vernon Advent Christian Home has been able to obtain a favorable return on their roofing investments.