When Should I Shovel the Snow Off My Roof? 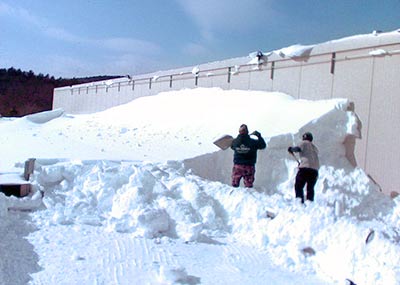 Roofs are designed to carry the normal snow load for a specific location as specified in the State Building Code. However, the design load is having the snow spread out equally across the roof. The recent snowfall in combination with the wind has caused snow on one side to be clear and the other to have a large drift which causes an imbalanced load on the roof making it more susceptible to collapse. Also bear in mind taking all the snow off one side but none off the other will have the same effect.

A simple way to determine the weight of the snow at your location is to use a piece of PVC pipe with a cap to push down to the base of the snow for a sample of the snow. Then upright it and let it melt. When the snow melts if you have 8 inches of water in the PVC pipe it equals 41 pounds per square foot and would go up or down with each inch of water by 5.2 pounds. This is a rough estimate figure and should be used with caution.

If you are not sure of the capacity of your roof, consult with a structural engineer to review the design of your roof structure.

If you think your roof may have been compromised, consult with a reputable builder and your local building official.

There are potential dangers of shoveling or raking snow from a roof, besides the collapse danger. There are the dangers of a person sliding off the roof, falling from a ladder, overexertion, or falling snow sliding on top of them.

Roofs that are flat also have a maximum snow load they can carry. With flat roofs it is important to keep the roof drains clear of snow, leaves and ice.

The State of New Hampshire provides this information in order for property owners to make an informed decision as to when they should consider removing snow from a roof. The decision of an individual property owner should consider the dangers against the benefits of removing the snow in determining their course of action. Remember the rule of thumb that condensed saturated snow weighs about 20 pounds per cubic foot and keep in mind the design capacity of your roof structure.