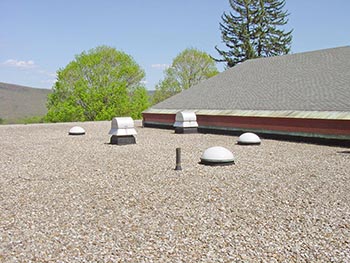 The Melanson Company has been performing work at this school since 1981. The initial work involved re-roofing the major flat-roofed buildings with stone ballasted EPDM rubber roofs. This larger work then led on to smaller projects such as slate and copper repair on a four-story slate roof. There were a number of other smaller roofs that required miscellaneous repair and/or maintenance.

As some of the early generation EPDM roofs began to deteriorate in the mid to late 90’s we recommended that the seams and flashings be refurbished, in order to help restore their integrity. This process is difficult to accomplish with stone ballasted roofs because locating the stone covered seams is not very cost effective. However, the early roof systems utilized neoprene for the flashing details. This material (that is no longer used) tended to break down shortly after ten years. The Melanson Company urged Austine to refurbish these details in the mid 90’s. 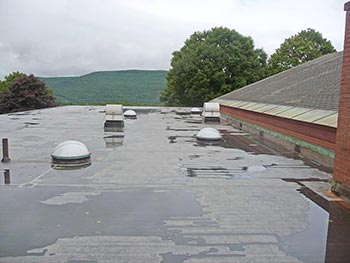 Thanks to Austine’s proactive approach they were able to obtain over 25 years of service from many of their early technology roofing systems. Recently they have proceeded to replace these older roofs with non-ballasted EPDM systems, more roof insulation as well as seam and flashing details that should help these systems (with proper maintenance) perhaps outdo their predecessors.